Last day at Bonnaroo, boy does time fly when you are having fun. The sun shines down on us when I awake comfortably at 8am. Confused why I am not melting but I don’t question it. We bid our neighbors good bye; it is odd to think that for four days we lived near people we didn’t know, trusted them to not steal our things and will probably never see them again. But then again Bonnaroo is a magical place. 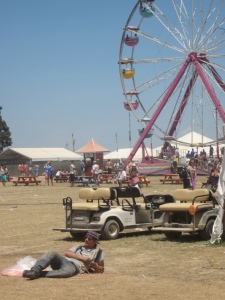 Since there was not much we wanted to see we headed to the Ford Tent to charge the dying iPhones (had to keep my twitter updated!) After a couple hours of hanging in Planet Roo, the “green” meaning Earth conscious side of Centeroo, we grabbed food and watched a man try and beat the Genius Book Record for longest glow stick chain. Idling around Centeroo I realized how familiar I had become with this area and lifestyle. I started to realize would have to leave the unreal day to day life of watching music and meeting new people.

4:30 pm means Iron & Wine are performing at Which Stage. Standing and swaying to Samuel Beam’s soulful sounds I took all of Bonnaroo in. After hearing Boy With a Coin and many others it was time for another musical first, seeing Robert Plant live. As giddy as a school girl I head over to What Stage to listen to the man who’s voice has stole my heart and ears. Then time to make a choice: The Strokes or Explosions In The Sky. We choose The Stokes and I do not regret it. My friends screamed to every song loving every minute which increases my excitement as I sang along with the familiar radio hits. Another band I have semi-ignored that impressed me. The sun set on our final day in Manchester, TN. 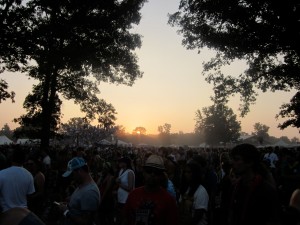 8:30 pm the final band took the What Stage, Widespread Panic. We headed over for the final hurrah, upset that it was coming to a close but glad we were not driving away that night like so many others. Although thousands of people left you could not tell, What Stage was as crowded as ever. We people watched while the jam band rocked away in the background. Fireworks and floating lights  filled the sky and around 10 pm we headed back to the tent. While the cars idled in traffic we snacked, packed and reminisced on this amazing experience. I went to bed that night knowing that Bonnaroo was one of the coolest things I’ve ever done, something that I will never forget. Hopefully more music festivals are in my future but driving home on Monday I smiled at what a success this adventure was ready to greet what was to come… a 9-6 job and a steady income. 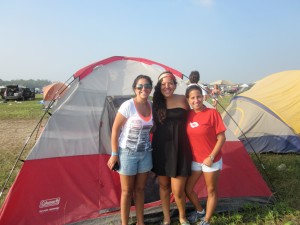 On to the next adventure…