It is Friday morning and I am a pro.  When my alarm rings at 7am I grab a blanket, head outside and immediately fall asleep in the shade from our neighbor’s tarp. I awake at 10am happy and relatively cool. Most important thing on the mornings agenda is a shower. We left on Tuesday so something more than the Fountain is needed for my curls, which were now dreads. I head over to the shower station to steal the samples from garnier fructis. The line was at least 50 people, not surprised since everything has a line at Bonnaroo. New plan, follow the people using the sink area. Before you all judge try to imagine the dirty, camping hippie like atmosphere. This is not for everyone. One smart large hippie with longer dreads than me attaches a shower hose and starts showering people waiting. I obviously get in line. Feeling successful and cooled off I head back to the tent ready for the line up.

The line to enter has diminished so we can flow in smoothly. We head over to find some shade by Which Stage and listen to Belá Fleck and the Flecktones, thanks for the suggestion Cristina! 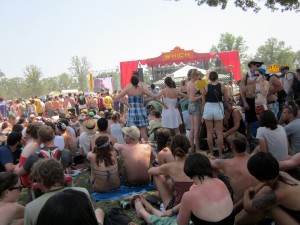 Then we move over to This Tent for Matt & Kim. I can’t help dancing along to the beats although they are unfamiliar. Definitely a great band with a great stage presence. We walk over to What Stage for The Decemberists and I get a phone call. Living Social has called and offered me a job! Standing in a bikini top, red shorts, green sunglasses and a yellow bandana I accept smiling, thinking this is exactly the way I would want to accept a job. Feeling on cloud 9 we finish The Decemberist set. Next up is the performance I had been waiting for; Florence + The Machine.

This Tent was not the place for Florence. Thousands of people, so it seems, crowd around trying to see the crazy red head sing and scream. Opening with Howl I knew this concert would amaze me. For an hour she belted Rabbit Heart, I’m Not Calling You A Liar, Drumming Song, Between Two Lungs, and my Favorite My Boy Builds Coffins. You Got The Love and Dog Days Are Over got the most attention but everyone jumped and danced to each song. 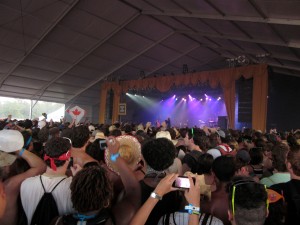 After that mind blowing performance we took a minute to recap. Walking back to What Stage we hang while awaiting My Morning Jacket. As a new listener I was pleasantly surprised how good they sounded live. With an hour till Arcade Fire Fernanda and I head back to the tent to prepare ourselves for the evening. Snacks in our stomachs and a blanket in our hands for the oncoming cold we walk back to Centeroo. That is when it happened. Blue glitter appeared in the sky, falling to the ground we grabbed it. They were helicopter like things with a flashing light and a QR code. Nothing can explain just how cool this looked.

Back to Centeroo for Arcade Fire, then quick dip into Bassnectar for some dubstep rave glowstick chaos.  Time check: 130am meaning its time for Lil Wayne; a slight change from the days line up. Wrapping up the evening was Pretty Lights

the next show I was most anticipating. My friends were whipped out by now but I could not stop. I moved into the crowd surrounded by glow sticks the music flowed through and around us. At 3:30 Pretty Lights ended I had to check out Shpongle. Not only was I in a state of exhaustion from lack of sleep and constant dancing I was really confused by the music and fans, glad I checked it out though. Now that it was 4:30 am it was time to drag ourselves back to the tent. 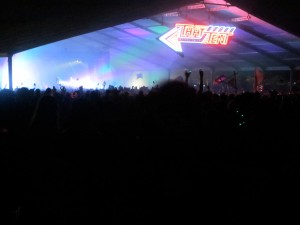