We are right in the middle between week 1 and 2. We are greeted by a fair packed with people. Carnival rides and games line the huge open parking lot. Merchants sell giant pretzels, cookies and hundreds of different food options. Basically think of any neighborhood fair you have been at and give it steroids. This is Oktoberfest. 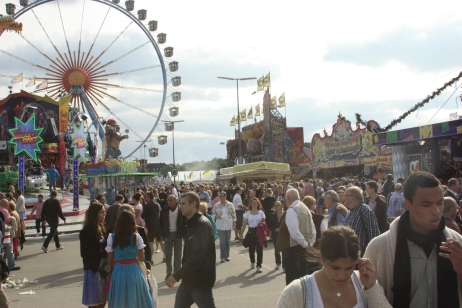 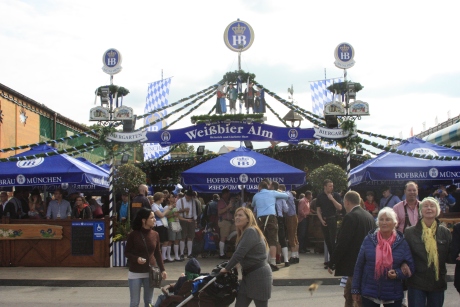 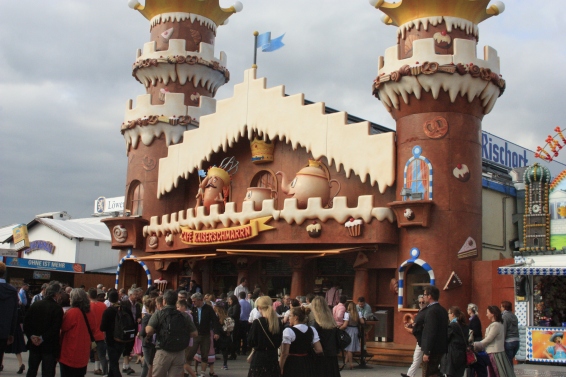 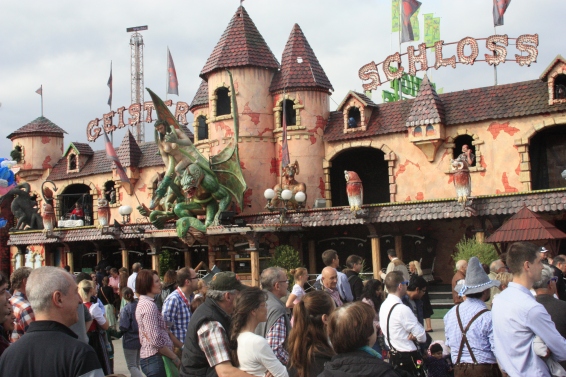 We walk around and take it all in. We settle on the VIP German tent called Kafer Wies n’ Schanke as our first experience. Apparently all the famous Germans flock there; Arnold Schwarzenegger was there the day before. The rumor is if you arrive in the middle of the day you first won’t be able to get into a tent and if you manage that you are definitely not finding a seat. Challenge accepted. 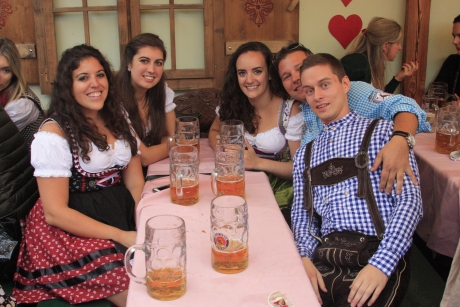 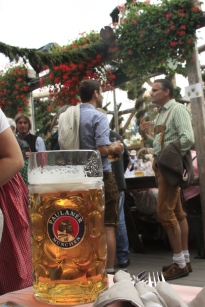 We sneak our way in, 3 girls in dirndls are hard to deny, and walk around this open space. It is exactly as one would picture a German beer garden. As we walk in a big party leaves and we grab the table. Our waitress arrives and asks what we want in German. All the menus are in German and my Spanish minor is no help here. She struggles through some English translations which we are thankful for. We order 3 steins, a huge pretzel and a kasespatzle. Kasespatzle is basically mac and cheese with crispies on top. It came with a cucumber dill salad.

For 6 steins (2 a piece I’m not that crazy) and all that food we paid 86 euro. Really not bad considering this is a festival. We were able to pay with a credit card here since we were ordering so much. Throughout the rest of the festival cash was only accepted. Each stein was 10 euro and a liter tall. Basically like paying $12 for 3 beers and no this was not Bud Light.

Mostly Germans are in this tent and the first group of guys joins our table. They love America and talk to us about the Big Bang Theory and the Cheesecake Factory. It is really hilarious what random parts of American culture are known worldwide. We sneak away to make some more friends as the Germans are starting to be as aggressive as most Italians are. As we are walking I hear someone mention Arlington. I stop, tap him on the shoulder and ask him if he is from there. He says him and his wife live in Arlington and she runs a store in Georgetown called Lynn Louisa. We laugh, second group of people we meet and they are from our backyard. We finished our second steins and thought it is time to try another tent. This is the hard part as it is now 7pm Friday in the middle of the event. Most tents stop letting people in and no one is leaving. Two of our friends from HS are in the Paulaner tent which is right across the way. Let’s try.

Each entrance we pass is blocked by security guards adamantly denying entry. We take a full lap around the tent and befriend a security guy at an exit. “Hold on” he says, “when my manager isn’t looking I will sneak you in”. He waves us in and success. We have arrived.

This is not your normal tent. The ceilings are at least 40ft high. Each tent has its own theme, band and 1000 picnic tables. By the end of the night everyone is standing on the tables, singing German songs loudly and cheering. “Prost!” they all cry.

After 45 minutes of green text messages later we figure out we are in a different tent than our friends. Well there goes that plan. Life without a data plan is much harder than it should be. We chalk it up to fate and decide to order beers. We befriend some Germans that claim to be from Canada. We are convinced it is a joke but have the best time quizzing them and challenging their Canadian facts.

Next we make some new friends, part French part German. They invite us to a German frat party. We look at each other and say absolutely. Most people would go to bed but not my friends. We take our trusty Ubahn to the frat house and enter, we are the only ones in dirndls.

There is a full bar with bartenders, pretzels and nuts line the bar, there are 5 boxes of pizzas on a table. There is a whole dance room and everyone is civilized. There is no keg. No idea what kind of frat this is but Germany definitely does this differently.

By 5am it was time to head home. Before you stress; we were safe and aware. This is not my first walk home with the birds chirping, not even my first time in Europe. We enter the hostel right as breakfast is opening. Perfect ending to a fantastically crazy day.

After all, what’s life without a little adventure?

21/7/21, feels like the beginning of a lucky year to me.
Some people swim laps in pools, some people chase sharks in the ocean.
Hiking in winter means beautiful waterfalls and muddy boots. Check the link in bio to travel the southern coastline of WA with me.
Instagram v reality / quokka edition
See this a$$, ain’t a rental | @lizzobeeating
R I V E R S | the last stop on the camp tour was off the Murray river. That night a dust storm almost blew us away but falling asleep to the sound of rain on the tent and waking up to a chorus of birds makes it all worth it.
Loading Comments...
%d bloggers like this: