God Bless black out curtains. Its 7am and I can feel the sun streaming through the windows of our hostel. Early morning today so we can kick it in to high gear. Today we have crafted our own Gold Cirlce tour. Renting a car was a fantastic idea because we were not stuck with 800,000 tourist on a bus waiting for everyone to get their selfie. We could go at our own speed… literally. RT 1 is a ghost town and the cops are too busy on instagram. Our hostel had breakfast for 1500 krona which is about $12. It was unlimited so we made some pb&js for the road. Much better plan than yesterday’s daytime snacks of trail mix and toblerones, especially when you are hiking for hours. We had 12 hours of fun ahead of us; here is the route we took from Reykjavik.

First stop is one I insisted on: Thingvellir. Game of Thrones films here which made it a must. If you watch it is where the Bloody Gate is located. The Hound and Arya head there to meet her aunt. We load in the car and follow the signs to Reykjavik.

This was the running joke because no matter how far out we got there were always signs showing us multiple ways to get to Reykjavik which clearly is confusing. I guess you always need to get to the capital from everywhere? Anyways an hour later we arrive at Thingvellir or Þingvellir and finally find the tourists. The Gold Circle is the “must” see of Iceland. Compared to yesterday’s lack of people today was overwhelming. Some fun facts about Thingvellir that only I probably find interesting. Ping actually means assembly. In the 1200s the people who lived there would meet there and make laws. There was a place literally called Law Rock. 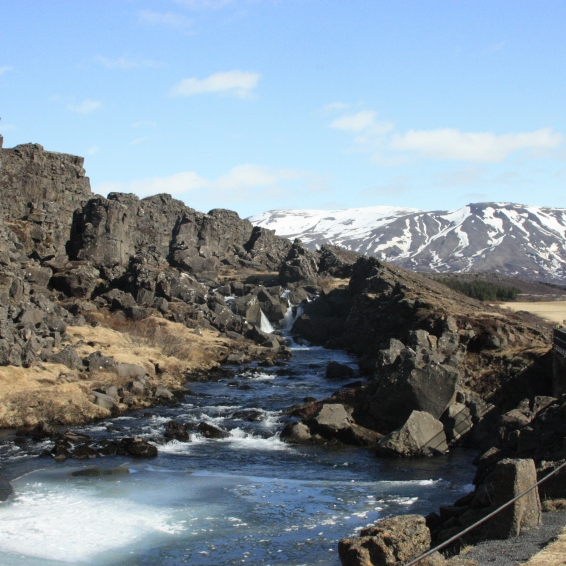 From there we headed to Geysers. Imagine how much more you would have paid attention in class if it had been in front of a geyser. One of them has’t gone off in years but Strokkur goes off every 10 minutes. You could see people eagerly waiting to take the best selfie. 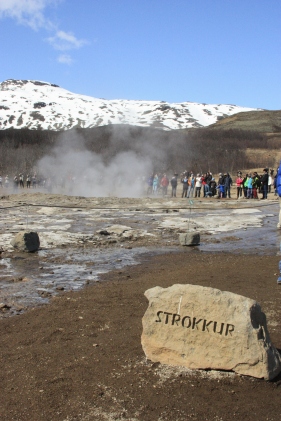 While I munch on my pb&j I take some time to take in this gorgeous scenery. After a quick walk through the gift store I decide upon a magnet and against the can of “Icelandic Mountain Air”. Seriously? Back in the Suzuki and it is onto the next waterfall: Gulfoss.

Gulfoss is Iceland’s most famous waterfall dropping 32m. Nothing compared to Glymur but the view definitely persuades you otherwise.

In between places we would lose sight of people and just have the road to ourselves. We scanned the radio stations and were pleasantly surprised they played the same music we did at home. They had the newest Mumford and Sons, obviously Of Monsters and Men, and surprisingly Robert Delong. It is clear to see that the landscape had to play some part in the creative writing process in Of Monsters and Men’s music. The landscape would change from low lands with white peaked mountain tops in the distance. After an hour you would turn the corner and see water cascading down a cliff. This isn’t even a famous waterfall just what happens when ice melts. Many times we had to stop, pull over and take some shots.

The sun is still high in the sky as we speed off to our next destination: Kerio. This is a 6,500-year-old volcanic crater. We attempt to type it into the Garmin and follow the route. It tells us to turn down this dirt road in a forest. Although it seems odd we proceed, who are we to question Icelandic roads? Although my guide book says it is off the may road we really take advantage of our 4 wheel drive we notice there are recently cut tree stumps in the “path”. After a good 20 minutes we realize this is absolutely wrong and head back to the road. What is it with guys and not taking directions? It is only a few minutes later that we find it, right off the main road with an information booth the most official entrance of all the places we have been to. As we scale up the volcanic crater we see the forest we were driving through behind. If we had kept going we would have driven up the side! So close. Fun fact for Kerio: Bjork played in this crater on a raft- video here.

As the day ticks onward we arrive at Seljalandsfoss. Yet another gorgeous waterfall. First, you can see it as you drive down the road. The incredible height and beauty draws you in from miles away. Second, as we pull up there is a full rainbow over the falls. You can see it as a circle from everywhere you stand because of how far the water spreads after it falls. We climb up a nearby hill to take some shots and then walk through prepared to be soaked. I have to give a shout out to my Ahnu hiking boots. Water proof, comfortable, durable and on Amazon prime. 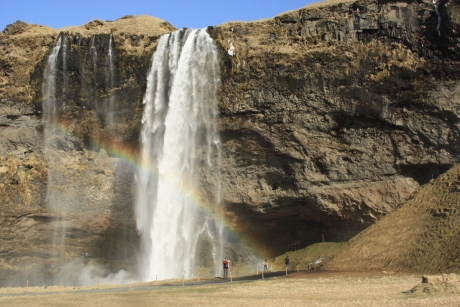 Only two more stops left and its 6pm although it looks like 2pm. And of course it is another waterfall. It is hard to not laugh and say sarcastically “great another waterfall”. I think people likely are not doing the Iceland speed tour like we are so it is less repetitive. The last waterfall of the day is Skogafoss. It is 62m high and has the stairs beside it to make your thighs feel the height. 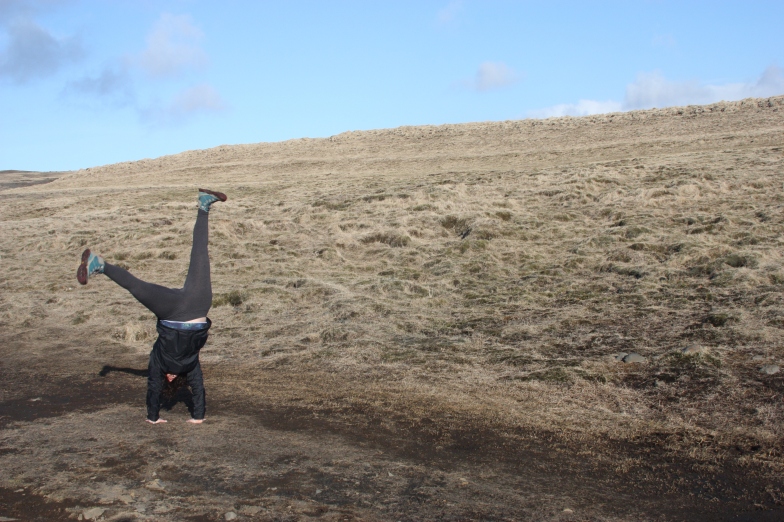 Finally the day is starting to take a toll on us. As we head to the last place we are tired, cold and definitely hungry. Those breakfast sandwiches did not last as long as intended. The very last stop is Dyrholaey. It is a recognizable rock formation and also where puffins head this time of year for mating. The beach is black sand from all the volcanic ash. It is closed during nesting season but apparently we were just before that window. The wind blows so hard I drop my camera and the protective lens shatters. Good thing Canon gives you two lens. This is also the time where you have to close the doors because the wind will literally rip them off. We have forgotten to do this so many times because we just wanted to get out of the car and run. These wide open spaces really make you feel like a kid again. We snap the pictures and run back to the car. Please let it be time for the hostel.

All roads lead to the sea #iceland @fearless_leaders 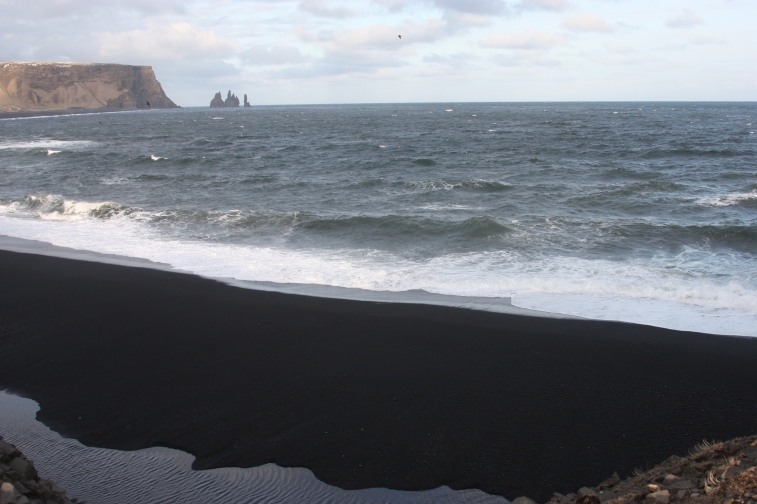 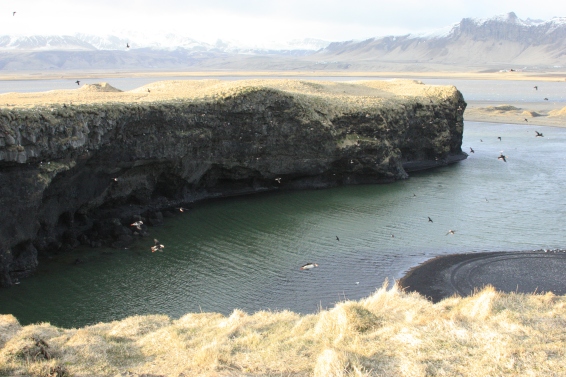 Little did we know the adventure was not over. As we head to Vik we realize we do not have a reservation at a hostel tonight. This is a town of 300 people so it can go one of two ways. We locate the hostels easily and start asking for vacancies. It is only at this time we realized it was 930pm and not only were we exhausted but we were starving. We speak with three different places, all full. As we start to get snippy someone directs us to a B&B called Like Vik. We ring the doorbell and after 5 minutes someone opens the door. She has 6 beds available- We’ll take 5 we yell! Now that we have a place to sleep we move on to food. She suggests the Icelandic Hotel around the corner. They close at 10pm so she calls them to wait for us. We yell our thanks and head over there!

After we cheers to some wine and order too much food we head back to the hostel. We each head to different scenarios, one of us passes out in full clothes and doesn’t move until morning, one of us facetimes with family, another is looking for the Pacquiao vs Mayweather flight and two of us are planning tomorrow. By 1am it is time to call it a night because damn has it been a day. I half heartedly stare out the window hoping to see the northern lights before I drift off.